Many of guys I talk to tend to run their Linux containers (LXC, Docker, you name it) straight on bare. And I call this a bad idea. This is because when running all the containers within one single box you will be hit by network or security problems. Not today, but it will happen. Why?

This term is used to describe a network where noone knows what's happening. Frankly it's working but don't-try-to-change-that (unless you're stupid brave / enough). 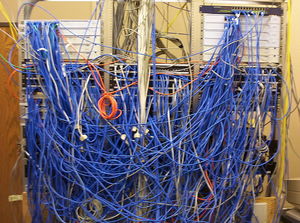 How does it refers to containers? Imagine that above wires are iptables rules. Should I write more? What happens when you restart iptables? Did you just killed the network in 300 containers running on that box? Oh whatever iptables - think docker0 interface + bonding/teaming + multiple bridges + veths + VIPs + vlans + whatever-your-sysadmins-come-with

And now one single junior - sysadmin just reloads iptables as was written in the 5th point of never-updated-procedure.

That's why I really like to have containers grouped on KVM VMs. KVM overhead is minimal these years. And it can save your ass. Just make a proper Ha planning and even if you kill some group of containers you will not have to firefight having 5 managers simultaneously on 3 calls ;)

Yes I know - this term is usually some big-fucking-unknown for most of guys / ignorants. And that is why you should isolate groups of containers from each other. Throw the first rock who uses SELinux / enforcing (under these circumstances you could possibly cover the security subject in the terms on containers). But even if you do then see > Clusterfuck network paragraph).

Btw - I had this talk during Infosec meetup some time ago about Docker security - enjoy!

Yes - if you're running OpenShift (or any other Open: Nebula / Stack / Whatever) then probably you will not care about isolation at all because this will be done for you without your interference. But - seriously? Usually people rather use VMs for hosting nodes of IaaSes.

No. Just wrote this after having a failure with LXC containers on Centos7 and no-real-explanation just "have-you-tried-to-turn-it-off-and-on-again?". 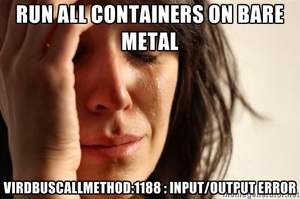